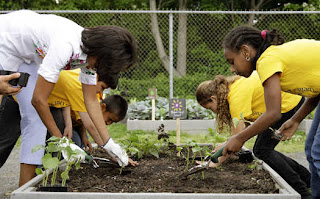 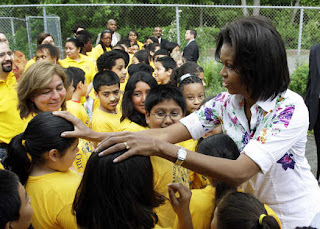 Michelle Obama did some more gardening today at Bancroft Elementary School in D.C.:

She helped plant cucumber and red pepper seedlings in their garden, too.
Before slipping on the gardening gloves, Mrs. Obama listened as four students read from essays describing how much their relationship with her, their involvement with the White House garden and her message about eating more fresh fruits and vegetables means to them.
"It has inspired us to eat better, work harder and grow more vegetables," said fifth-grader David Martinez.
Involving the students in the White House garden was about more than just digging in the dirt, Mrs. Obama said.
"They've really learned some lessons about nutrition," she said, as the rest of their classmates and their parents listened from the sidelines. "They're making different choices because they're a part of the process of planting and tilling the soil and pulling up the food."
She held up the project an example of what can be done nationally with kids and nutrition, particularly at a time of rising obesity rates and illnesses in youngsters that have been attributed to being overweight. AP