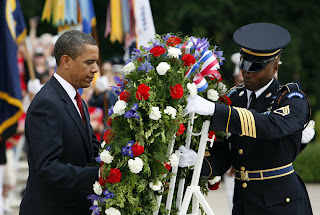 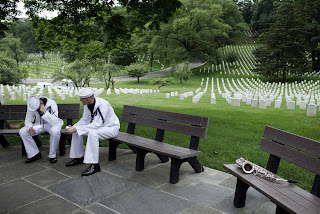 Prior to the wreath-laying ceremony at Arlington National Cemetery, Obama invited families who had lost loved ones in the war to a private breakfast.

President Barack Obama has praised the men and women of America's fighting forces as the "best of America."

The president spoke after participating in a solemn Memorial Day tradition, laying a wreath at the Tomb of the Unknowns at Arlington National Cemetery. It is the burial ground for American veterans dating back to the Revolutionary War.

In brief remarks after the wreath-laying, Obama wondered why the country's fallen warriors were willing to bear the heaviest burden.

He said a willingness to risk their lives for people they've never met "is why they are the best of America."

As usual, the wingnuts on both the left and the right stirred up some controversy instead of letting the day be what it's supposed to be:

Despite an appeal for him to end a presidential tradition dating back to Woodrow Wilson, President Barack Obama sent a Memorial Day wreath to the Confederate Monument at Arlington Cemetery. But he also sent a wreath to a monument honoring African-American soldiers who fought in the Civil War.

A group of several dozen university professors and scholars wrote a letter to the president asking him to not send a wreath or any commemorative token to the memorial erected in honor of the soldiers who fought and died for the South in the Civil War.

Click here to read the full text of the letter.

"We ask you to break this chain of racism stretching back to Woodrow Wilson, and not send a wreath or other token of esteem to the Arlington Confederate Monument," the letter states. "This monument should not be elevated in prestige above other monuments by a presidential wreath."

In their letter to the president, the group says that the monument is a "denial of the wrong committed against African Americans by slave owners, Confederates, and neo-Confederates."

The wingnuts on the right were in high gear because one of the letter signers was William Ayres.
Here is the wreath-laying ceremony video:

Transcript here.
Posted by Olga at 9:06 AM