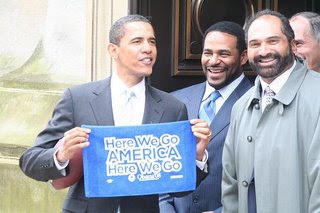 Update: See the interview with Matt Lauer here.
If you haven't already heard, Obama's rooting for the Steelers.
Before the game, Matt Lauer will interview Obama live:

NBC News' Matt Lauer before the game. (This would be the TV network delivering the game in all its 6 pm EST kickoff glory.)

John McCain was invited but said he'll be watching with his family.
Posted by Olga at 10:32 AM