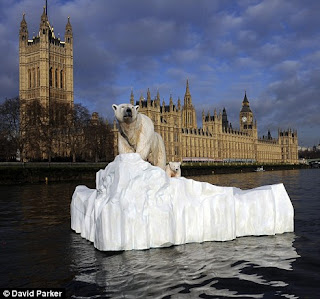 Big day on Monday and another promise fulfilled.
Obama will announce a couple of things regarding air pollution tomorrow, including granting states, such as California, a waiver under the Clean Air Act so that states can require tougher auto emission standards than EPA standards.
Seems kind of weird that you'd have to get permission to be cleaner.
California (and about 14 other states) requested a waiver in past years, but Bush denied it.
Read California Gov. Arnold Schwarzenegger's recent letter to Obama here.
On Tuesday Obama's expected to meet with republican caucuses regarding the economic package. On Wednesday, the House is expected to vote on the American Recovery and Reinvestment Plan.

The directive makes good on an Obama campaign pledge and signifies a sharp reversal of Bush administration policy. Granting California and the other states the right to regulate tailpipe emissions would be one of the most emphatic actions Mr. Obama could take to quickly put his stamp on environmental policy.

Mr. Obama stopped short of ordering the agencies to reverse the Bush administration policy, but they are widely expected to do so. Once they act, automobile manufacturers will quickly have to retool to begin producing and selling cars and trucks that get higher mileage than the national standard, and on a faster phase-in schedule. The auto companies have lobbied hard against the regulations and challenged them in court.

Here's what else Obama's announcing tomorrow:

Beyond acting on the California emissions law, officials said, Mr. Obama will announce that he is moving forward with nationwide regulations requiring the automobile industry to increase fuel efficiency standards to comply with a 2007 law, rules that the Bush administration decided at the last minute not to issue.

He will also order federal departments and agencies to find new ways to save energy and be more environmentally friendly. And he will highlight the elements in his economic plan intended to create new jobs around renewable energy.