Obama Says At Ease In the Oval Office 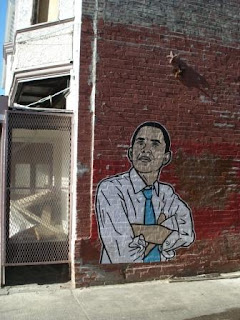 Our president is a happy man because he gets to eat with his family. How cool is that? What an awesome commute: 30 seconds.
New Oval Office dress code: no coats necessary and business casual on the weekend.

NYT: Thus did an ironclad rule of the George W. Bush administration — coat and tie in the Oval Office at all times — fall by the wayside, only the first of many signs that a more informal culture is growing up in the White House under new management. Mr. Obama promised to bring change to Washington and he has — not just in substance, but in presidential style.

Although his presidency is barely a week old, some of Mr. Obama’s work habits are already becoming clear. He shows up at the Oval Office shortly before 9 in the morning, roughly two hours later than his early-to-bed, early-to-rise predecessor. Mr. Obama likes to have his workout — weights and cardio — first thing in the morning, at 6:45. (Mr. Bush slipped away to exercise midday.)

He reads several papers, eats breakfast with his family and helps pack his daughters, Malia, 10, and Sasha, 7, off to school before making the 30-second commute downstairs — a definite perk for a man trying to balance work and family life. He eats dinner with his family, then often returns to work; aides have seen him in the Oval Office as late as 10 p.m., reading briefing papers for the next day.

“Even as he is sober about these challenges, I have never seen him happier,” Mr. Axelrod said. “The chance to be under the same roof with his kids, essentially to live over the store, to be able to see them whenever he wants, to wake up with them, have breakfast and dinner with them — that has made him a very happy man.”

Mr. Obama has also brought a more relaxed sensibility to his public appearances. David Gergen, an adviser to both Republican and Democratic presidents, said Mr. Obama seemed to exude an “Aloha Zen,” a kind of comfortable calm that, Mr. Gergen said, reflects a man who “seems easy going, not so full of himself.”

At the Capitol on Tuesday, Mr. Obama startled lawmakers by walking up to the microphones in a Senate corridor to talk to reporters, as if he were still a senator. Twice, during formal White House ceremonies, Mr. Obama called out to aides as television cameras rolled, as he did on Monday when the director of the Environmental Protection Agency, Lisa P. Jackson, asked for a presidential pen.

“Hey, Lisa,” Mr. Obama called out to his staff secretary, Lisa Brown, “does she get this pen?” This is a really good story you should read at NYT