No More President Obama on Plates? 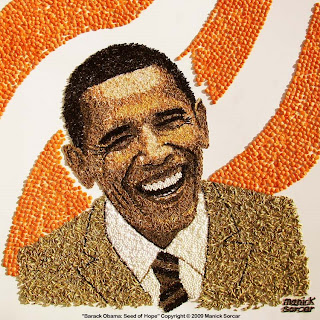 White House lawyers are looking for ways to control Obama's image, which is on everything from plates to toilet paper. To me, it seems like a dumb move. It's like the music industry suing over music downloads.
I guess the concern is that people could conclude that Obama endorses certain products. Well, Research in Motion may as well come out with an Obama BlackBerry because Obama's over the moon for his BlackBerry.
But Ty's Malia and Sasha dolls crossed the line because they're reaping profits on Obama's daughter's image. They should be at least be compelled to donate some of the sales to charity.
I won't drink Pepsi with their new logo that coincidentally looks like the Obama sunrise.
Ben & Jerry's on the other hand, was a big supporter of Obama, so if I liked pecans, I might eat some Yes Pecan.
Love all the Obama art and I don't see White House lawyers going after that sort of thing. If they did, they'd have serious backlash.

Bloomberg: White House lawyers are examining ways to control the use of the president’s image, while recognizing the worldwide fascination about Obama’s election, First Amendment free-speech rights and easy access to videos and photos on the Web.
“Our lawyers are working on developing a policy that will protect the presidential image while being careful not to squelch the overwhelming enthusiasm that the public has for the president,” White House spokeswoman Jen Psaki said.
Obama’s calls for change and his “Yes We Can” campaign mantra are being evoked to sell assembly-required furniture in Ikea’s “Embrace Change” marketing campaign, bargain airfares during Southwest Airlines Inc.’s “Yes You Can” sale and “Yes Pecan” ice cream at Ben & Jerry’s Homemade Inc. shops. Read the rest 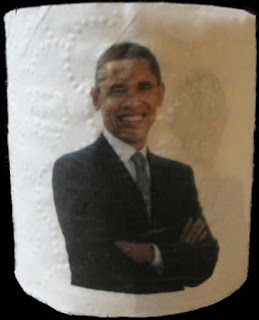