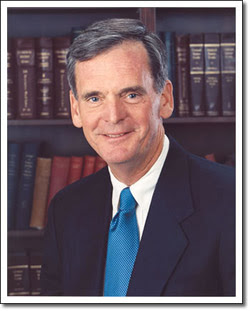 Jake Tapper says New Hampshire Sen. Judd Gregg, a republican, could be nominated to lead the Department of Commerce as early as Monday.
Who is Gregg? Here is his past voting record. He's for immigration reform and free trade. He's a moderate republican. Here's his senate site.

A plus for Gregg is that he could secure a 60-person majority needed to block a republican filibuster, which prevents a bill from being voted on. But to secure the majority, Al Franken also needs to win the senate seat. Gregg also needs to be replaced by a democrat. Here's an update - Gregg is looking to keep his seat republican. It's probably a good idea or else his nomination would like like a political move.
What Gregg has said about the stimulus:

NYT: “I’m trying to participate constructively, help the new president where I can be helpful and be part of the loyal opposition where I disagree with him.”

On the morning after the House passed an $819 billion package of stimulus spending and tax cuts without a single Republican vote in favor, the action moved to the Senate, where Republicans began mobilizing for a fight. Mindful of the danger of simply opposing a popular new president at a time of national distress, they were intent on coming to the floor with proposals of their own to substantively change the bill, including additional tax cuts and reduced spending.

“We do need a very robust and aggressive stimulus package,” Mr. Gregg said, “but we need one that works and is focused on the problem, which is housing, and that essentially doesn’t end up aggravating the long-term debt of the country” with spending that extends beyond the two-year life of the recovery plan.

Part of his bio:

As the Ranking Member of the Senate Budget Committee, Senator Gregg continues to emphasize the critical importance of a fiscally responsible federal budget -- one that will fund U.S. defense and homeland security needs while controlling overall federal spending, so that future generations can inherit a government they can afford. Senator Gregg will work with other leaders in Congress to aggressively reduce the size of our federal budget deficit while addressing the rate of growth of entitlements. In addition to these responsibilities, and knowing that millions of Americans rely on Social Security, Senator Gregg remains deeply involved in efforts to save the program. He previously served as Bipartisan Co-Chair of the National Commission on Retirement Policy, Co-Chair of the Senate Republican Task Force on Social Security, and Chairman of the Senate Budget Committee Task Force on Social Security. In past Congresses, he introduced a landmark bipartisan proposal to save Social Security for the next 100 years without raising taxes and to move us closer to solving this core public policy problem.

Gregg speaking on H1-B program, which businesses, especially tech companies, have been trying to expand to bring in more highly skilled and educated international workers to the U.S.: