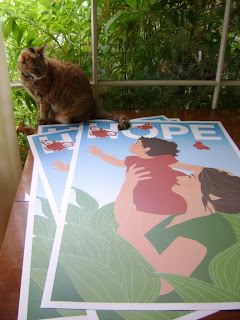 One of the most revealing lines of the debate: Obama said freezing spending would be like using a hatchet when a scalpel is needed.

They were asked about limited budgets due to the bailout. McCain said he'd freeze spending, except for veterans, defense and entitlement programs.

That's McCain's style -- he's a hatchet. Without a second thought, fire the SEC chairman. Without a thought (practically) hire Palin. He doesn't have the kind of mind for second thinking and he has a narrow world view. McCain loathes details. He'd much prefer a hatchet.

Meanwhile, Obama with his scalpel would be cautious and thoughtful and err on the side of doing the right thing. McCain would hatchet and think later.

Here is that exchange:

MCCAIN: How about a spending freeze on everything but defense, veteran affairs and entitlement programs.

MCCAIN: I think we ought to seriously consider with the exceptions the caring of veterans national defense and several other vital issues.

LEHRER: Would you go for that?

OBAMA: The problem with a spending freeze is you're using a hatchet where you need a scalpel. There are some programs that are very important that are under funded. I went to increase early childhood education and the notion that we should freeze that when there may be, for example, this Medicare subsidy doesn't make sense.

Let me tell you another place to look for some savings. We are currently spending $10 billion a month in Iraq when they have a $79 billion surplus. It seems to me that if we're going to be strong at home as well as strong abroad, that we have to look at bringing that war to a close.

MCCAIN: Look, we are sending $700 billion a year overseas to countries that don't like us very much. Some of that money ends up in the hands of terrorist organizations. We have to have wind, tide, solar, natural gas, flex fuel cars and all that but we also have to have offshore drilling and we also have to have nuclear power.

Senator Obama opposes both storing and reprocessing of spent nuclear fuel. You can't get there from here and the fact is that we can create 700,000 jobs by building constructing 45 new nuclear power plants by the year 2030. Nuclear power is not only important as far as eliminating our dependence on foreign oil but it's also responsibility as far as climate change is concerned and the issue I have been involved in for many, many years and I'm proud of the work of the work that I've done there along with President Clinton.

The CNN/Opinion Research Corp. survey is not a measurement of the views of all Americans, since only people who watched the debate were questioned and the audience included more Democrats than Republicans.

Fifty-one percent of those polled thought Obama did the better job in Friday night's debate, while 38 percent said John McCain did better.

Men were nearly evenly split between the two candidates, with 46 percent giving the win to McCain and 43 percent to Obama. But women voters tended to give Obama higher marks, with 59 percent calling him the night's winner, while just 31 percent said McCain won.