Fact Check on the Debate 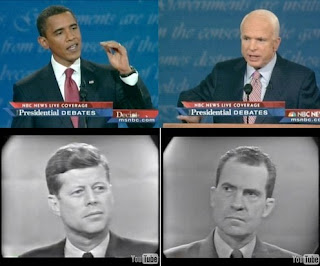 Obama claimed Iraq “has” a $79 billion surplus. It once was projected to be as high as that. It’s now down to less than $60 billion.
McCain repeated his overstated claim that the U.S. pays $700 billion a year for oil to hostile nations. Imports are running at about $536 billion this year, and a third of it comes from Canada, Mexico and the U.K.
Obama said 95 percent of “the American people” would see a tax cut under his proposal. The actual figure is 81 percent of households.
Obama mischaracterized an aspect of McCain’s health care plan, saying “employers” would be taxed on the value of health benefits provided to workers. Employers wouldn’t, but the workers would. McCain also would grant workers up to a $5,000 tax credit per family to cover health insurance.

McCain misrepresented Obama's plan by claiming he'd be "handing the health care system over to the federal government." Obama would expand some government programs but would allow people to keep their current plans or chose from private ones, as well.

Obama and McCain traded incorrect statements on each other's health care plan.
Obama: So you may end up getting a $5,000 tax credit. Here's the only problem: Your employer now has to pay taxes on the health care that you're getting from your employer.
As we said before, McCain’s plan doesn’t call for taxing employers on health care benefits; it would instead tax employees. As the law stands now, employees don’t pay taxes on the dollar value of their health insurance benefits. Under McCain’s plan, they would.

McCain also misrepresented Obama's plan when he said that his opponent favored "handing the health care system over to the federal government."
McCain: Well, I want to make sure we're not handing the health care system over to the federal government which is basically what would ultimately happen with Senator Obama's health care plan. I want the families to make decisions between themselves and their doctors. Not the federal government.
McCain made a similar claim in his acceptance speech, when he said that
Obama's plans would "force families into a government run health care
system." We called it false then and we stand by that. Obama's plan mandates coverage for children, but not for adults, and it does not require anyone to be covered by a nationalized system. Obama's plan expands the insurance coverage offered by the government, but allows people to keep their own plans or choose from private plans as well.

McCain also screwed up in history:

McCain mangled his military history:
McCain: President Eisenhower, on the night before the Normandy invasion, went into his room, and he wrote out two letters.
One of them was a letter congratulating the great members of the military and allies that had conducted and succeeded in the greatest invasion in history, still to this day, and forever.

And he wrote out another letter, and that was a letter of resignation from the United States Army for the failure of the landings at Normandy.
The story is widely circulated in military circles but not entirely true. Eisenhower (then a general, not yet a president) did in fact write a letter taking responsibility should the D-Day invasion fail. But Eisenhower's letter does not mention resigning. Here's the full text:
Eisenhower (June 5, 1944): Our landings in the Cherbourg-Havre area have failed to gain a satisfactory foothold and I have withdrawn the troops. My decision to attack at this time and place was based on the best information available. The troops, the air and the Navy did all that bravery and devotion to duty could do. If any blame or fault attaches to the attempt it is mine alone.
No mention of quitting the Army, or his command.