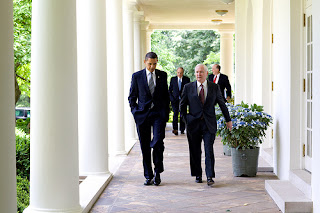 After serving eight presidents, Defense Secretary Robert Gates is winding down. Gates says he's not going to be doing much opinion TV. Instead, he's going to write books and get a life:


“I think one of the reasons it’s probably time for me to leave is that sometimes too much experience can get in the way, and you can get too cautious,” Gates told POLITICO as he flew over his native Kansas on the first leg of an overseas farewell tour. “It may … be making me more cautious that I ought to be.”

Gates, a white-haired veteran of generations of Washington power struggles, was the skeptic in two big internal battles ahead of his June 30 retirement: He opposed intervening in Libya, and strongly questioned intelligence behind a risky helicopter raid to kill Osama bin Laden.

Now, the 67-year-old is heading back to his beloved lakefront home in the other Washington, north of Seattle. Gates said he plans to write two books – one a memoir (to be published after 2012), and the other a partly humorous guide to transforming huge public institutions. But he vows that for now, he won’t be popping off. Read the whole thing at Politico