Weather Was Bonkers in March, April and May 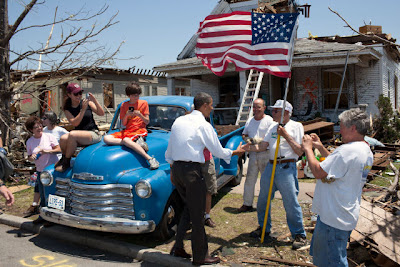 2011 is setting records in disaster costs. Read the report here.


The spring (March-May) of 2011, particularly April, brought extreme weather and climate events to many parts of the United States. Tornadoes, flooding, drought, and wildfires ravaged many parts of the country during the period, and each of these extremes broke long-standing records and have been compared to the 'worst such cases' in history. While similar extremes have occurred throughout modern American history, never before have they occurred in a single month. According to the Storm Prediction Center (SPC), there were 875 preliminary tornado reports during April alone, and the confirmed number of tornadoes will approach the all-time monthly record of 542 tornadoes set in May 2003. Record rainfall along the Ohio River Valley, punctuated with snowmelt across the upper Midwest, causedrecord flooding along the mid and lower Mississippi River, with water levels surpassing the historic floods of 1927 and 1937. Above-normal precipitation and vegetative growth during 2010, followed by dry and windy conditions the first five months of 2011, created idealwildfire conditions across the Southern Plains where millions of acres of land burned. According to the U.S. Drought Monitor (USDM), the same region experienced Extreme-to-Exceptional [D3-D4] drought following consecutive months that were record to near-record dry.