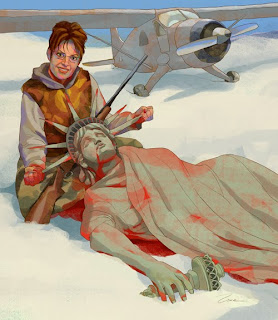 I admire Sarah Palin's blind confidence in herself. It's remarkable. She lacks a sense of humility or awareness of herself. It's surely narcissistic. It must be nice to plow through life oblivious to critics or facts or information. I wish I had a little of that. She doesn't let anything stand in her way. She's like a thorn in everyone's side--republicans and democrats. The media can't get enough of her. But if she wins the republican nomination, it will be a gift to us:

Palin made the case for her electability should she decide to run for president, addressing one of voters' core concerns about the 2008 vice presidential nominee.

"I believe so," Palin told ABC's Barbara Walters when asked if she could beat Obama. The Hill

Palin's interview with Walters, also overrated, will be aired Dec. 9.
Posted by Olga at 1:45 PM