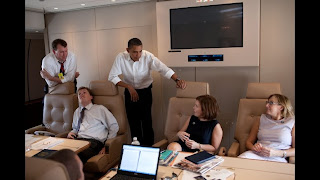 Air Force One
The left has totally misconstrued this debate.
These are the likely compromise choices: extend the tax cuts for the rich temporarily and extend the cuts for the middle-class permanently OR extend both temporarily and fight about permanent extensions for the 2012 elections.
Obama's stance: Permanent extension of Bush tax cuts for the middle class.
The tax cuts expire at the end of the year. If they expire without an extension, temporary or otherwise, all of our taxes go up.
Obama is traveling and is in Japan now attending the Asia-Pacific Summit. He'll be back on Sunday.
Posted by Olga at 11:39 AM