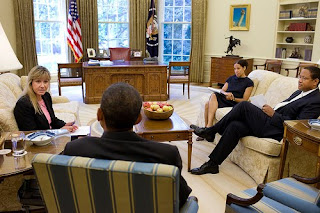 The White House is documenting briefings with photos. Obama is getting updated on Arizona wildfires.
From the White House:

Earlier today President Obama was updated by senior staff on the ongoing response to the wildfires in Arizona and the Administration’s continued work with state and local officials to fight it. Under the President’s direction, both the U.S. Forest Service and FEMA have been in close contact with state and local emergency management officials and continue to monitor the fire activity. The U.S. Forest Service is actively working to support state and local forest fighting efforts and is managing the fires through high level, inter-agency management teams. The Governor of Arizona has made two requests for Fire Management Assistance Grants for the Hardy fire and the Shultz fire; both grants were awarded on the day the requests were made at the direction of the President.

The President also called Arizona Governor Jan Brewer to express his concerns about the wildfires threatening homes and businesses across the state and to assure her of the continued support of the federal government in helping state and local officials protect people’s lives and property. The President indicated that the U.S. Forest Service, under his direction, is actively engaged and working with state and local teams to manage the immediate response to the fires and reinforced that FEMA will continue to closely monitor the fires and remains in close contact with state and local officials. The President offered praise for the tireless efforts of the local and state emergency management officials working around the clock to fight and contain the fires, mobilize resources, carry out evacuations and coordinate shelters, and asked the Governor to keep him updated on additional support the State needs as the response continues.