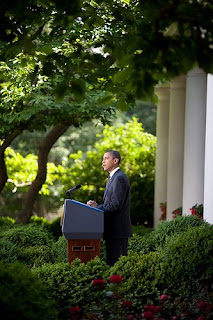 House and Senate have finally agreed on financial reforms and have come up with a bill that is expected to be on Obama's desk by the Fourth of July:

Congress early Friday moved to the brink of passing a landmark overhaul of Wall Street, which would hand President Barack Obama a major victory ahead of the midterm elections.

A 43-member conference of House and Senate lawmakers finished the bill just after 5:30 a.m., after a marathon, all-night session of dealmaking, lobbying and scores of votes. The 2,000-page bill aims to prevent taxpayer-funded bailouts and revamp regulation of mortgages, credit cards, broad financial system risks and the $600 trillion derivatives market.
....
Frank, chairman of the conference committee, said the bill was tougher in the end than he once thought was possible to pass through Congress.

"You hate to have the kind of pain people had during the crisis, but it redoubled our resolve," Frank said. "We have done something that has been badly needed and sorely needed for some time," Dodd said.

Treasury Secretary Timothy Geithner said the bill, "represents the most sweeping set of financial reforms since those that followed the Great Depression."
Read more at The HIll