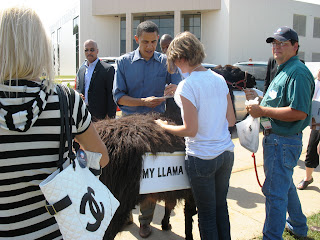 Anyway, Obama said when he starts negotiating his health care bill, "we're going to do it on CSPAN" so that everybody could see what what the insurance industry was up to. This was at the gym at Del Sol high school, and the 2,700 people went pretty much batshit crazy. At the prospect of watching health care reform legislation being negotiated on a channel that 2,699 of them have never watched. So that was cool.