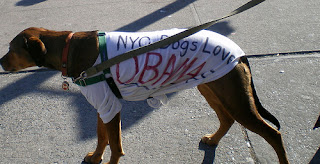 an excerpt from Barackmania (see story below):

We love you Obama!" young women screamed from nearby dormitory windows. Obama,
who would be the first black president, hopes America's best-known political
dynasty will help him fend off rival Hillary Clinton, who would establish a
dynasty of her own if she took the White House eight years after her husband
Bill left it. Several in the crowd said they were turned off by the Clintons'
attempts to paint Obama as "the black candidate" over the past two weeks. "You
didn't need to bring that into the equation," said retiree Carol Belkin, 62, who
said she had planned to support Clinton until last week. "I want to see this
country brought together. I think the pair of them are divisive." "I thought it
was really below the belt," said Howard University graduate student Anita
Wheeler, 24. Obama's charisma and youth have drawn comparisons to the late
President Kennedy, who in 1963 delivered a famous speech at the same school
calling for a ban on nuclear weapons testing. Obama offered no new policy
proposals as he devoted much of his 15-minute speech to praise of the Kennedys.
But he also made sure to ask for the votes of those in the crowd — an unusual
event for a national politician in the capital city.