ran into another fan.
why do they all seem to be in the UK?
flo's blog has some awesome photos from the earls court gig and funny tales. she's also into "circle journals." i've never heard of circle journals, i had to look it up on the internet. this explains what they are. what fun!
in honor of flo, here's johnny! (even though she's a bigger ant fan) 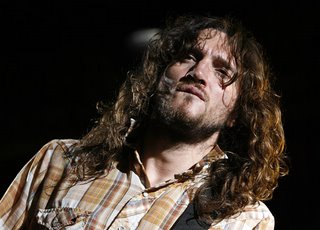 i wish i could credit these fine photos to their sources. i can say they are from either janes, rhcp or invisible-movement. who knows where they originate.

while we're at it -- chilis up for seven mtv video nominations, tied with hip shaking shakira. vote at mtv's overly animated and annoying site
Posted by Olga at 6:17 PM