yucca mountain is going to open.

only in vegas, baby. but if you exclude vegas, nevada is one of the most beautiful states with a vast wilderness and a charm that not many people know of. and even vegas has its own very unique allure in spite of itself.

WASHINGTON - The Energy Department has a new opening date for the long-delayed
Yucca Mountain nuclear waste dump in Nevada: March 31, 2017.

That's 19 years late. But it's the first concrete timeline the department has produced in some time.

The Energy Department planned to announce the schedule at a congressional hearing Wednesday but shared it with congressional offices Tuesday. Several of them made it public.

Under the schedule, the department would submit its license application to the Nuclear Regulatory Commission on June 30, 2008, get authorization to begin construction on Sept. 30, 2011, complete construction on March 30, 2016 and begin accepting nuclear waste on March 31, 2017.

The dates correspond to general goals department officials have shared recently with lawmakers.

"Our work will continue to be based on sound science .... The program now has reachable, definable target dates that will allow us to open Yucca Mountain as the nation's repository for spent nuclear fuel," Energy Department spokesman Craig Stevens said in a statement. read the rest 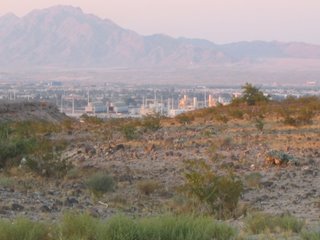 looking out at henderson
Posted by Olga at 5:47 PM