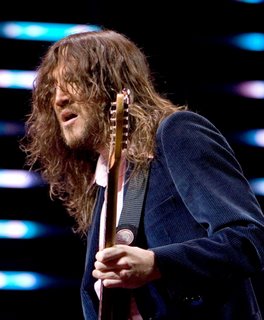 a pretty cool review: john provided the lightning. of course he did.

By the time RHCP hit the stage at 9.30pm, the sight of 45,000 shrivelled up rock fans cramming out the Fuji Rock main stage area proved that these LA rock upstarts were, very much, the real deal.

Big bands demand big crowds. It looked like a war-zone across the field filled with ankle-deep mud, crushed Asahi cans and stray sneakers, but this devoted crowd had the stamina to rock.

The damp night air needed a little heat and no better bunch of misfits to get the job done. These days, the band heads out first with a little punk-funk jam to warm-up and Flea, dressed in his flamboyant bodysuit, didn’t need an invite to draw the early attention.

As always, Smith looked like a car mechanic while Frusciante, radiating a guitar saviour persona with his Jesus locks and beard, was ready to nail some of the best riffs on the day.

But there was no telling where the rain stopped and when the sweat started once the livewire Kiedis sprung on stage in trademark freaky styley mode with the groovy opening blast Can’t Stop. More mayhem to get the Japanese masses up and shouting with Dani California, Scar Tissue and Fortune Faded at the front of the set.

Touring tricks and banter aside, there was hardly a dip in the frenzied energy levels.

If Sammy Davis Jr were alive today, he would have been proud that the RHCP has adopted his “give ‘em what they want” showbiz assault. Assembling a set that swung between classic and new material, the band had more than enough room to shift, shuffle and smirk in comfort. In other words, the current RHCP live experience was predictable but, most importantly, extremely reliable.

It’s hard to improve this combination but how the band’s live sound has gotten better. Live at Naeba, each Pepper was in his element – with those stretching exercises backstage and ginseng drinks gulped through the show probably making the big difference.

Healthy living is the RHCP manifesto now, but Kiedis, 43, will be the first to remind you that these were no clean cut choir boys on stage. “Last night I got Hello Kitty pregnant ... but I’m sure it’s gonna be a cute baby,” he cheekily proclaimed before humping his mike stand and launching into the ridiculously infectious Charlie.

Though, Kiedis, Flea and Smith’s importance to the RHCP machine cannot be underestimated, it was phenomenal guitarist Frusciante who provided the lightning last Saturday. Each and every tune dispatched came with an amazing display of excellent fretwork, with Frusciante, 36, unleashing a sprawling range that sounded like fret poetry made by fuzz pedals, vintage Fenders and a retro spirit that harks back to Hendrix. This bloke was simply awesome – a genuine modern day guitar hero that could fool about with How Deep Is Your Love? (from the Bee Gees) and still make an emotive connection during his solo spot at the fest.

Many fans have summed up Stadium Arcadium as Frusciante’s tour de force performance. Rightfully, it was mostly the new songs that mirrored Frusciante’s mercurial touch, from the blistering Readymade right through the bruised yet soulful Wet Sand, a gorgeous tune that for at least – a moment – made RHCP the best rock band in town. Show-stopping stuff.

At times like this, you wish such a gig didn’t have to finish so soon. A typhoon might have thrown RHCP offstage 10 years ago at the same fest, but last weekend, it was the band that whipped up the electrifying storm.