yes, the hairball likes the chili peppers, john frusciante and american idol!
so here's my prediction: taylor hicks.
why: cause he's the underdog.

this story in the la times attempts to predict who might win, alluding to the cute and the humble factors but ignoring the underdog factor. i suppose katharine mcphee could be considered an underdog because she started out not being a favorite. but she's young and likely to get a contract anyway.

taylor has been a working musician his whole life and is perhaps the oldest contestant on the show. he's quirky, weird. he's the underdog.

why did chris get the boot? he's a nice guy, who married a single mom and took his family under his wings. he can sing. he was my fave. all good. but he didn't show enough of himself. america wants to see. he also wasn't the underdog.
so with that, get ready for the gray haired american idol! 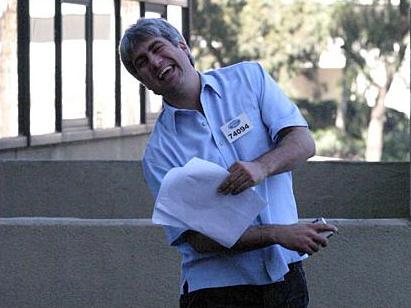