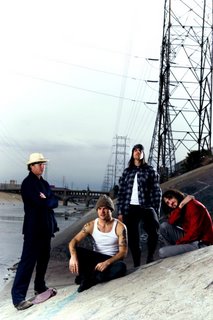 stadium arcadium at the top for the week ended sunday, selling more than 442,000 CDs

The band has also racked up a notable collection of #1 modern rock and rock tracks, including the current single "Dani California." The video supporting the hit single, directed by Tony Kaye ("American History X") portrays an entire history of rock 'n' roll in 4:46 min.

The new album has also met with critical praise. For instance, Rolling Stone magazine critiqued: a "triumph that could pass for another, lesser group's great hits collection." Q magazine in the UK touted: "a band at the top of their game effortlessly raising the bar even further." People magazine opined: "an ambitious, inspired double disc... 'Stadium Arcadium' hits it out of the park." The New York Times stated: "the Peppers' best work since the 1991 'BloodSugarSexMagik.'" The Los Angeles Times essayed: "...by far their most accomplished." And the Independent in the U.K. reviewed: "One of the definitive American rock albums of the past three decades."

Next up, on Saturday, May 20, Red Hot Chili Peppers will don custom-designed Simpson race suits when they perform at the NASCAR NEXTEL Cup Series All Star Challenge in Charlotte, NC (7 pm ET on FX). It will mark the first time the heavily-touring band has performed at a sporting event and the first time NASCAR has scheduled a performance during a race. The Chili Peppers will take center stage between the first and second race segments.

Red Hot Chili Peppers will launch their Stadium Arcadium World Tour in Barcelona, Spain on May 30. They will return to the United States to headline the Lollapalooza festival in Chicago August 4-6, and then kick off the North American leg of their World Tour on August 11 at the Rose Garden Arena in Portland, OR, continuing through November 5 at Excel Arena in Minneapolis.