when will this kind of headline become obsolete. didn't we learn from New Orleans and the katrina disaster that relatively poor people can't simply pick up and move and they have to protect what they do have so it's not like they're ignoring it. they're hoping for the best.

besides i hear they have a mystic guy who knows the volcano's spirits (he gets paid less than $1 a month to appease the these spirits) and he says it's not going to blow. it sure does look like it's going to blow though. 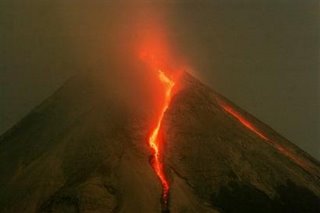 this is an AP photo
here's the science behind volcano eruptions.
how stuff works' scientific explanation
from HSW:

Of the 500 or so active volcanoes, around 10 are erupting on any given day. For the most part, these eruptions are small and well-contained, so they don't threaten life and limb. From time to time, however, we get a major eruption that either takes lives or, more often, devours property. And while not as catastrophic as life-threatening eruptions, these destructive events can certainly take a heavy financial toll on the victims.

There have been, in recorded history, dozens of extremely catastrophic volcanic eruptions -- one may even have wiped out an entire civilization. In fact, in just the last 200 years there have been 19 eruptions that have killed more than 1,000 people. Volcanic activity has certainly played a significant and destructive role in our history, and will continue to do so in the future.

This is only half the story, however. As destructive as it is, volcanic activity is one of the most important, constructive geological processes on Earth. After all, as we saw when we looked at plate tectonics, volcanoes are constantly rebuilding the ocean floor. As with most natural forces, volcanoes have a dual nature. They can wreak horrible devastation, but they are also a crucial element of the earth's ongoing regeneration. They are certainly one of the most amazing, awe-inspiring phenomena on the planet.