red hots top the UK charts! word is john is looking dapper in his TV interviews over there.

The band appealed to fans earlier this month not to download illegally a poor sound quality version of the album when it was leaked onto the Internet by an unknown music pirate.

The chart success of the 28-track CD, the band's ninth studio album, comes ahead of a UK tour starting next month. 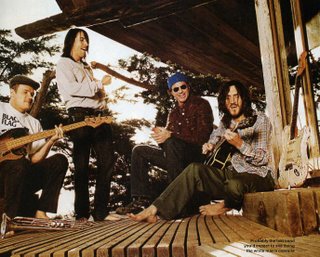 In the singles chart, American hip-hop duo Gnarls Barkley celebrated their seventh successive week at number one with "Crazy".

It is the 40th single to have earned seven weeks at the top since the UK charts started in 1952, a feat most recently achieved last year by Tony Christie and Peter Kay with "(Is This The Way To) Amarillo".

The Pet Shop Boys scored the top 10's only new entry with "I'm With Stupid" at number eight.

The single is the British pop duo's first top 10 hit since 2003. Their ninth studio album "Fundamental" is released later this month.