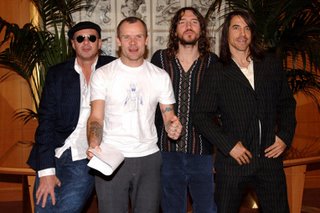 LOS ANGELES (Billboard) - The Red Hot Chili Peppers are on target to become the third rock band in as many weeks to reach the top of the U.S. album charts.

Based on reports of first-day sales, their first studio album in four years, the double-disc "Stadium Arcadium," should have no trouble topping 400,000 units when Nielsen SoundScan issues data for the week ended May 14 on Wednesday. The album is currently No. 1 in the U.K.