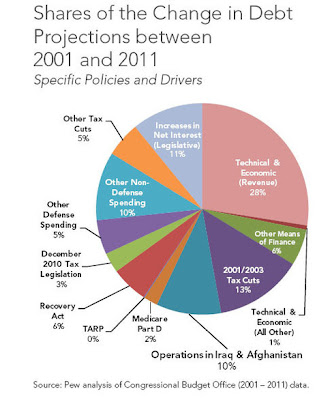 Since the GOP carnival kicked off with the debt clock today, I thought I'd repost this in honor of the clown show festivities:

This chart shows which policies got us into debt.
The stimulus accounted for 9% of the nation's debt. Remember the stimulus (see the Recovery Act slice and the 2010 tax legislation on the chart) was intended to stimulate to head off a depression, which it did. The stimulus went into effect Feb. 2009. The recession technically ended in June 2009. Bush's recession was the worst since the Great Depression (see charts).
The Bush tax cuts and the wars in Afghanistan and Iraq accounted for 25% of the debt.
The biggest slice, the Technical and Economic revenue is the result of 2 recessions. Explainer.
Granted, an argument could be made that the democrats went along with the wars in Afghanistan and Iraq and Medicare Part D (as you may recall, Obama stood against the war in Iraq), but most of the nation's debt was racked up under Bush, not Obama.
Read more at Planet Money.
If we really want to be fair, we could say that both democrats and republicans, during the Bush administration, are responsible for the nation's debt, not Obama's policies.
Obama's policies have been clean-up of the Bush years.
Posted by Olga at 8:13 PM