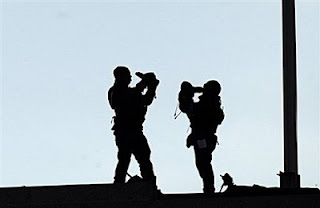 UPDATE Oct. 1: Just as I thought, just a dumb kid, probably with dumb parents. The Secret Service concluded their investigation.
This was all over Twitter yesterday (which tipped off Secret Service) and it took Facebook a long enough time to take down the poll:

The social networking site Facebook is cooperating with a Secret Service investigation into a survey posted on the site asking users if they supported killing the president. A spokesman for Facebook confirmed the company was cooperating with the government investigation, but downplayed Facebook's culpability in the creation of the poll, emphasizing that it was posted using third-party application hosted on the Facebook website.
Politico

The poll is so stupid that it probably wasn't the work of a full-fledged Beck follower, but rather a dumb dumb with nothing better to do.
Posted by Olga at 2:47 PM