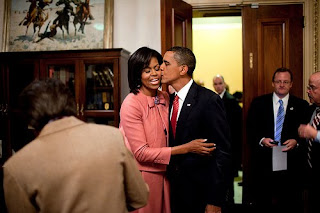 Update 9-25: See Obama's final speech and news conference here.
Update: More from the last day of the G20 here.
Obama arrives in Pittsburgh with Michelle tomorrow at 3:30 pm eastern. The Obamas will welcome leaders at the Phipps Conservatory and Botanical Gardens at 6 pm. At 7:30 Obama will attend a working dinner.
Obama's statement:

Michelle and I look forward to welcoming world leaders to the wonderful city of Pittsburgh on September 24th and 25th and we thank the people of Pittsburgh and Pennsylvania for opening their city as a showcase to the world.

The Pittsburgh Summit is an important opportunity to continue the hard work that we have done in confronting the global economic crisis, and renewing prosperity for our people. Together, we will review the progress we have made, assess what more needs to be done, and discuss what we can do together to lay the groundwork for balanced and sustainable economic growth. Pittsburgh stands as a bold example of how to create new jobs and industries while transitioning to a 21st century economy. As a city that has transformed itself from the city of steel to a center for high-tech innovation –including green technology, education and training, and research and development – Pittsburgh will provide both a beautiful backdrop and a powerful example for our work.

It’s important to note how far we have come in preventing a global economic catastrophe. A year ago, our economy was in a freefall. Some economists were predicting a second Great Depression. Immediate action was required to rescue the economy. In the United States, we passed an historic Recovery Act that quickly put money in the hands of working families, and is putting Americans to work all across the country – including in Pittsburgh and the surrounding area. That includes companies like East Penn Manufacturing, a third-generation family business which is now building batteries for the hybrid, energy efficient vehicles of the 21st century. That includes Serious Materials manufacturing plant outside of Pittsburgh that was shuttered last year, which is now rehiring the workers who lost their jobs and giving them a new mission: producing some of the most energy-efficient windows in the world. And at medical laboratories in Pittsburgh, scientists are making advances in tissue regeneration, which will help people across the globe, including our troops wounded in combat in Iraq and Afghanistan.

The steps that we have taken to jumpstart growth have also been coordinated with our partners around the world. Industrial production throughout the G20 has either stabilized or is growing. Global trade is expanding. Stresses in financial markets have significantly abated and our financial institutions are raising needed capital.

But all of us must remember that our work is far from complete – not when our people are still looking for work. As the leaders of the world’s largest economies, we have a responsibility to work together on behalf of sustained growth, while putting in place the rules of the road that can prevent this kind of crisis from happening again. To avoid being trapped in the cycle of bubble and bust, we must set a path for sustainable growth while steering clear of the imbalances of the past. That will be a key part of the G20 agenda going forward and the Pittsburgh Summit can be an important milestone in our efforts.

In a place known as the city of bridges, we can come together to advance our common interest in a global recovery, while turning the page to a truly 21st century economy.

By working with our friends and partners from around the world, the U.S. is ready to help lead this effort in Pittsburgh and beyond.

If you're on Twitter, follow G20 tweets here.
Here is the White House G20 blog.
What's on the menu and more at ObamaFoodorama
Security at the G20
Posted by Olga at 8:38 PM