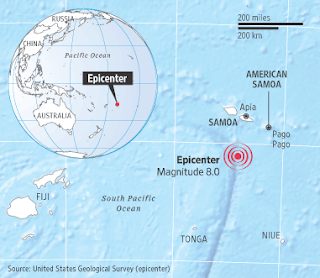 Tsunami waves ripped across islands of the South Pacific, wiping out several villages and killing at least 34 people in Samoa and American Samoa, with the number of dead expected to escalate as more bodies are found.

The tsunami followed a massive earthquake, with a magnitude of 8.0, according to the U.S. Geological Survey, that struck about 120 miles off the Samoan coast at 6:48 a.m. local time Tuesday.