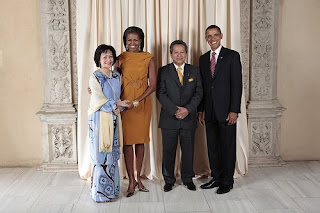 Update: Watch video of Obama's speech here.
Today, the last day of the G20 in Pittsburgh, Obama will hold a news conference at 4:40 pm eastern. It should be live streamed at cnn.com or msnbc.com. Also on Obama's agenda today is a meeting with Gordon Brown. The meeting with Brown wasn't on the original schedule, which led Brian Williams, following the lead of the British press, to suggest that Brown was snubbed by Obama. In light of today's announcement on Iran's secret nuclear plant, the two will probably be discussing Iran.
Michelle Obama will visit the Andy Warhol Museum in downtown Pittsburgh and she and other spouses will visit Pittsburgh Creative And Performing Arts School, a magnet school (politico). Watch the students prepare for the visit here.
Last night the Obamas hosted world leaders and their spouses.

This from Helene Cooper at the NYT:

At 6:15 p.m. Mr. and Mrs. Obama stepped out of the Phipps Conservatory, underneath an awning to greet their first guests. Mr. Obama in a dark blue suit, Mrs. Obama in a taupe, pink and green patterned cocktail dress with straps. Pink patent leather two-inch heels. Hair pulled back in a full, bouffant faux ponytail. Long pearl necklace, pearl earrings. No stockings.

Mrs. Obama: “Right here,” stepping beside him, as it started to drizzle.

Mr. Obama pokes fun at the pool, whispering something to Reggie Love and Mrs. Obama, then looking at pool and saying: “We’re talking about how you guys are all waiting to write something down.”

First to arrive is an Allegheny County official who’s name your pooler didn’t get. (There’ll be a lot of that to come).

Then the mayor of Pittsburgh, Luke Ravenstahl and his wife.

There’s a pause for a while between arrivals, and the First Couple turns to the pool for entertainment.

Mrs. Obama: “You guys are so quiet. Somebody should sing.”

Mr. Obama: “We should have music. Where’s the music?” Read the rest here