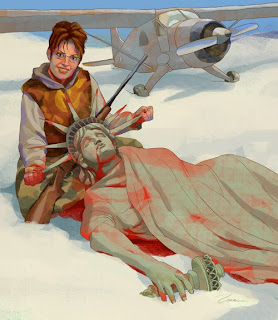 Zina Saunders illustration
Palin gets a big spread about stuff we already know--she's charismatic representing a small sliver of Americans. She's highly inept and doesn't have the worldliness needed to be a modern day vice president, let alone president. She doesn't worry about what she doesn't know, which is where audacity comes in:

By all accounts, Palin was either unwilling, or simply unable, to prepare. In the run-up to the Couric interview, Palin had become preoccupied with a far more parochial concern: answering a humdrum written questionnaire from her hometown newspaper, the Frontiersman. McCain aides saw it as easy stuff, the usual boilerplate, the work of 20 minutes or so, but Palin worried intently. At the same time, she grew concerned that her approval ratings back home in Alaska were sagging as she embraced the role of McCain’s bad cop. To keep her happy, the chief McCain strategist, Steve Schmidt, agreed to conduct a onetime poll of 300 Alaska voters. It would prove to Palin, Schmidt thought, that everything was all right.
Then came the near-total meltdown of the financial system and McCain’s much-derided decision to briefly “suspend” his campaign. Under the circumstances, and with severely limited resources, Schmidt and the McCain-campaign chairman, Rick Davis, scrapped the Alaska poll and urgently set out to survey voters’ views of the economy (and of McCain’s response to it) in competitive states. Palin was furious. She was convinced that Schmidt had lied to her, a belief she conveyed to anyone who would listen. Read the big Palin story here.

Palin wanted to speak to her people:

Election Night brought what McCain aides saw as the final indignity. Palin decided she would make her own speech at the ticket’s farewell to the faithful, at the Arizona Biltmore, in Phoenix. When aides went to load McCain’s concession speech into the teleprompter, they found a concession speech for Palin—written by Bush speechwriter Matthew Scully, who had also been the principal drafter of her convention speech—already on the system. Schmidt and Salter told Palin that there was no tradition of Election Night speeches by running mates, and that she wouldn’t be giving one. Palin was insistent. “Are those John’s wishes?” she asked. They were, she was told. But Palin took the issue to McCain himself, raising it on the walk from his suite to the outdoor rally. Again the answer was no.