Obama's Accomplishments As of March 2012 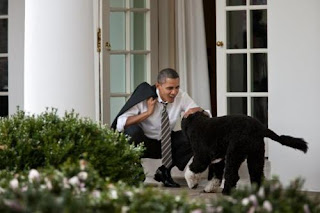 I would argue that Obama's most stunning accomplishment is sparing us a depression, bringing us out of recession (technically as of June 2009) and putting us on the path to recovery -- without any assist from republicans.
Not only has he done it without an assist, his administration has accomplished that feat in face of global turmoil -- from uprisings to economic meltdowns. He's done it with boulder after boulder being rolled in front of him by the republicans, who have nastily mocked him from the sidelines in their pettiness and singular goal to win back the White House. Republicans have barely even acknowledged Obama is the president, tagging on to birther efforts and other juvenile behavior that shouldn't be rewarded.
A long read from the Washington Monthly:


In mid-January, pollsters for the Washington Post and ABC News asked a representative sampling of Americans the following question: “Obama has been president for about three years. Would you say he has accomplished a great deal during that time, a good amount, not very much, or little or nothing?”

When the poll’s results were released on January 18, even the most seasoned White House staffers, who know the president faces a tough battle for reelection, must have spit up their coffee: more than half the respondents—52 percent—said the president has accomplished “not very much” or “little or nothing.”

It is often said that there are no right or wrong answers in opinion polling, but in this case, there is an empirically right answer—one chosen by only 12 percent of the poll’s respondents. The answer is that Obama has accomplished “a great deal.”

Measured in sheer legislative tonnage, what Obama got done in his first two years is stunning. Health care reform. The takeover and turnaround of the auto industry. The biggest economic stimulus in history. Sweeping new regulations of Wall Street. A tough new set of consumer protections on the credit card industry. A vast expansion of national service. Net neutrality. The greatest increase in wilderness protection in fifteen years. A revolutionary reform to student aid Read in full.


1. Passed Health Care Reform: After five presidents over a century failed to create universal health insurance, signed the Affordable Care Act (2010). It will cover 32 million uninsured Americans beginning in 2014 and mandates a suite of experimental measures to cut health care cost growth, the number one cause of America’s long-term fiscal problems.

2. Passed the Stimulus: Signed $787 billion American Recovery and Reinvestment Act in 2009 to spur economic growth amid greatest recession since the Great Depression. Weeks after stimulus went into effect, unemployment claims began to subside. Twelve months later, the private sector began producing more jobs than it was losing, and it has continued to do so for twenty-three straight months, creating a total of nearly 3.7 million new private-sector jobs.

3. Passed Wall Street Reform: Signed the Dodd-Frank Wall Street Reform and Consumer Protection Act (2010) to re-regulate the financial sector after its practices caused the Great Recession. The new law tightens capital requirements on large banks and other financial institutions, requires derivatives to be sold on clearinghouses and exchanges, mandates that large banks provide “living wills” to avoid chaotic bankruptcies, limits their ability to trade with customers’ money for their own profit, and creates the Consumer Financial Protection Bureau (now headed by Richard Cordray) to crack down on abusive lending products and companies.