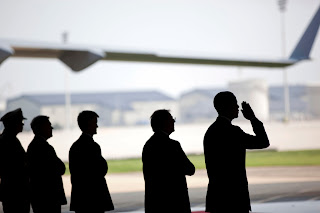 The ceremony was closed to the press.


President Obama made an unannounced trip to Dover Air Force Base in Dover, Delaware, today to pay tribute to the 30 U.S. troops killed over the weekend in Afghanistan.
Two transport planes brought home the remains of the 30 servicemen, who were killed when their Chinook helicopter was shot down on Saturday. The crash was the deadliest single loss for U.S. forces in the decade-long war. Due to the catastrophic nature of the crash, the remains are still being identified. The Armed Forces Mortuary Affairs Office at Dover will make a positive identification.

The casualties included 22 Navy SEALs, most of whom were members of SEAL Team 6 -- the counterterrorism unit that carried out the mission to find Osama Bin Laden. None of those involved in the Bin Laden raid were among the dead Saturday, U.S. officials have said. CBS