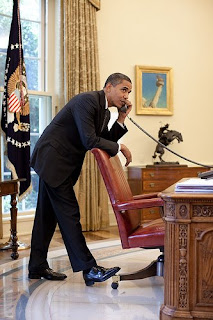 I'm not fond of Terry Moran as an interviewer. He reminds me of that creepy Dateline guy, who uses drama for an effect. Moran just sounds silly. But here is the video. transcript.
Despite the so-called "setback," on health care, I think reform will get done. Blue dogs aren't saying they don't want reform. Watch blue dog Loretta Sanchez talk about that here. Perhaps it's a good thing that the blue dogs are so influential because none of the bills in any of the committees sound like they're up to par. If they're going to overhaul health care, they might as well come up with the best possible overhaul. If we could only strap tape across the mouths of the republicans, I think everyone, even republicans, might be happy with the results.

Moran asks Obama about his spirituality being affected by the presidency: "I had a habit of praying every night before I go to be. I pray all the time now."
I think Obama needs a nice vacation at Blue Heron Farm.
Posted by Olga at 3:30 PM