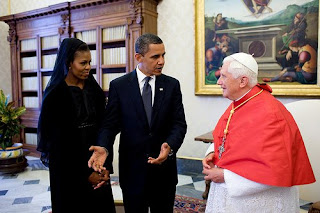 The media is baffled as to why Obama is spending so much time giving interviews. They say he risks over exposure. They say he's "frittering away the novelty of his presence."
Obama's not worried about the novelty of his presence. He's worried about reforming health care (yes, I really do think that and I don't think he'd mind not getting reelected in 2012) and he's concerned that his message keeps getting drowned out by controversies, diversions and distortions, and the republican trolls under the bridge who keep throwing rock after rock. Where is the republican health reform plan? What do they do all day? I only see them whining about everything.
Obama isn't trying to reach the people who are engaged. He's trying to reach the people who are getting misinformation, the people who are being lied to, the people who are getting gossip instead of news. It only took a few months for people to flip on health care, which is probably because they don't understand the process or the goals. The more interviews Obama gives, the more opportunities for people to pick up a factual tidbit along the line. He's trying to communicate by blanketing his message so that more and more people understand.

Some Democrats said Mr. Obama should worry about frittering away the novelty of his presence. “It’s a risk of overexposure,” said Joe Trippi, a political consultant. “If you use it all up on health care, you may not be able to use it on something else. But if you’re going to risk using it all up, this is the one to risk it on.”

Past presidents have been more exclusive in giving exclusives, believing they would have more impact that way. In their first four months, Mr. Clinton gave 11 interviews and Mr. Bush gave 18, compared with 43 by Mr. Obama, according to Martha Joynt Kumar, a presidential communications scholar at Towson State University. That has accelerated in recent days as Mr. Obama popped up in venues ranging from “Anderson Cooper 360” on CNN to “Dr. Nancy” on MSNBC. NYT