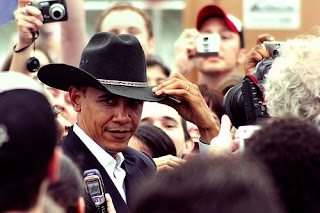 Obama in a hat on the campaign trail

"Now, I know folks think I'm a city boy, but I do appreciate listening to country music," President Barack Obama said to guests gathered in the East Room for a performance by country musicians Alison Krauss and Union Station.
Brad Paisley and country music legend Charley Pride also entertained the audience, which included first lady Michelle Obama, Cabinet secretaries and lawmakers.
The president, whose hometown is Chicago, said the genre has helped to make Americans more hopeful. "It's captured our restlessness and resilience, and told so much of our story in the process," he said.
The performance, along with a morning workshop for students, was the second in a music series that Mrs. Obama launched last month to encourage arts and arts education. The first session was devoted to jazz. A classical music workshop is planned for the fall. Read more at AP

The musicians also held a workshop for kids. Read about that here. Watch Obama introduce the music series here.

Obama's diggin' the music but he needs a hat!