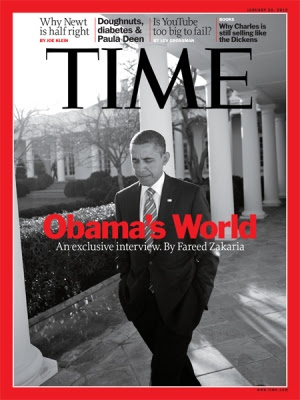 Note the maturity level of Obama's responses compared to the GOP rhetoric that seems to get more absurd each day. You'll never hear Obama demean, degrade or question the patriotism of anyone. I still want an adult to be in charge. You?


Fareed Zakaria: Mitt Romney says that you are “timid, indecisive, and nuanced.”

I particularly like the third one. What do you say?

I think Mr. Romney and the rest of the Republican field are going to be playing to their base until the primary season is over. Once it is, we’ll have a serious debate about foreign policy. I will feel very confident about being able to put my record before the American people and saying that America is safer, stronger and better positioned to win the future than it was when I came into office. And there are going to be some issues where people may have some legitimate differences and there are going to be some serious debates just because they’re hard issues. But overall, I think it’s going to be pretty hard to argue that we have not executed a strategy over the last three years that has put America in a stronger position than it was when we, than when I came into office.

I have made myself clear since I began running for the presidency that we will take every step available to prevent Iran from obtaining a nuclear weapon. What I’ve also said is that our efforts are going to be… Excuse me. When I came into office, what we had was a situation in which the world was divided, Iran was unified, it was on the move in the region. And because of effective diplomacy, unprecedented pressure with respect to sanctions, our ability to get countries like Russia and China that had previously balked at any serious pressure on Iran to work with us, Iran now faces a unified world community, Iran is isolated, its standing in the region is diminished. It is feeling enormous economic pressure. And we are in a position where, even as we apply that pressure, we’re also saying to them there is an avenue to resolve this, which is a diplomatic path where they forego nuclear weapons, abide by international rules and can have peaceful nuclear power as other countries do, subject to the restrictions of the NPT, the Non-Proliferation Treaty. Read more