Obama and Poland's Komorowski's Remarks to Press May 28 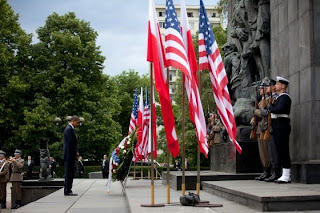 Read the U.S.-Poland initiatives factsheet. Read a wrap of Obama's time in Warsaw here.
From the White House:

PRESIDENT KOMOROWSKI: (As translated.) Mr. President, ladies and gentlemen, dear friends, I think we feel it all too well that it’s worth having dreams, but dreams come true when, apart from dreams, we have courage and determination to pursue such goals as freedom and democracy.

Mr. President, today in this room you are meeting the Polish democracy. These are those who fought for the Polish freedom and for the democratic state, and they fought well. Those are the people who brought in the anti-communist position; those are the people of Solidarity. And here in this room, you also see those who have come here to meet you, and those are the protectioners of today’s democracy. Those are the ones who will take part in the today’s processes of democratization. Here we see the representatives of the both chambers of the parliament. There are ministers; there are also representatives of the major political forces in Poland, in our democratic Poland.

I also would like to indicate that that part of the Polish democracy, which is not directly involved with politics, but they co-create Polish democracy, those are nongovernmental organizations as they are watchdogs; they, in fact, incentivize us as to take due care of democracy as our constant challenge and our constant commitment, and to also be in touch with the society.

Also there is the former prime minister, Mazowiecki, together with us, and he is the person who would like to talk with you about our Polish experience in transformation; that is, when we were passing away from the communist regime and getting onto a democratic society.

And once again, I would ask to speak Mr. President first, and then the former prime minister.

PRESIDENT OBAMA: Well, thank you very much, Mr. President, and thank you for the great honor of appearing with all of you. I want to express my thanks to everyone who is here today to share with me their experiences and expertise in democracy building. I look forward to listening and learning from Poland’s esteemed democracy leaders and younger activists.

I have to say that it is especially a treat for me to be able to see so many of you who inspired us in America when the Solidarity movement first appeared. I was still a relatively young man. I have a lot of gray hair now, but at the time I was still studying. And I remember at that time understanding that history was being made because ordinary people were standing up and doing extraordinary things with great courage and a great -- against great odds.

And the Solidarity leaders and others in this room launched a peaceful revolution that eventually led to a regime’s collapse and the downfall of a broader system of Soviet repression. And that’s had ripple effects and ramifications around the world, not just in Central and Eastern Europe.

Your actions charted a course for freedom that inspired many on this continent and beyond. And it has many relevant lessons, so we want to encourage all states undergoing similar experiences to learn from Poland. We all know that in the aftermath of the overthrow of a repressive regime, emotions run high. But new democratic governments have to show themselves to be able to channel that energy in constructive ways, to hold themselves to higher standards than their authoritarian predecessors in being inclusive, respecting the rule of law, respecting minority rights, believing in freedom of expression even when we don’t agree with what’s being expressed. And so I think that Poland has navigated that process as well as any country in recent history.

I very much value the contributions that Poland is making in Tunisia. I appreciate the fact that your foreign minister has now visited Benghazi.

So, again, let me thank everybody in this room, but the people of Poland, for being an inspiration to change around the world. And I’m very much looking forward to hearing some of the observations that those who’ve fought long and hard for democracy may have as we face similarly transformative moments around the world.