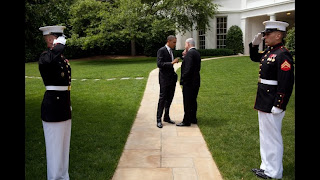 Netanyahu is picking a fight with Obama, his ally and the guy in charge around these parts, thinking that it's good strategy to alienate Obama in favor of republicans, thinking that it will get him somewhere, maybe a republican president in 2012. I guess he hasn't seen the GOP lineup.
Republicans are playing along. Any chance to slam Obama through cheap politics--they'll take it! Even if Middle East peace is at stake.

Netanyahu will speak to Congress tomorrow and he'll likely say the Palestinians are the obstacle to peace. But Congress doesn't matter and neither do the republicans. The world is moving and it's moving fast and Netanyahu needs to get on board a peace plan. And not as a favor to Obama, but for the sake of Israel, so says opposition leader, Tzipi Livni.


If Israel did not take a step to lead the peace process, it would inevitably be led, she said. Haaretz

This article is dead on:


Republican presidential hopefuls took Netanyahu's cue to pile on Obama. Governor Tim Pawlenty said Obama had "thrown Israel under a bus". Gingrich said Obama's ideas were "dangerous" and Sara Palin called him a "temporary leader".
But when Obama spoke Sunday at the Israel lobbying organization AIPAC, he had a blunt message: The U.S. will continue to back Israel to the hilt, but that won't be enough to reverse Israel's slide into international pariah status unless it manages to achieve a peace agreement with the Palestinians. Netanyahu could, no doubt, easily negotiate a peace treaty with Pawlenty or Gingrich or Palin in the course of an afternoon, but if he's incapable of doing what's necessary to conclude a deal with Palestinians, then no amount of congressional support is going to do anything for Israel's international position.
No matter how much of Capitol Hill Netanyahu manages to convince that it is the Palestinians that represent the main obstacle to peace, Obama seemed to be warning, he'll have a tough time convincing anybody in the rest of the world of his position.
....
So, as the Israeli leader prepares for another love-fest in Congress on Tuesday, Obama is tapping his watch. And reminding Netanyahu that no matter how persuasive Eric Cantor or Steny Hoyer find his arguments, it's the Palestinians he'll have to convince of his peacemaking credentials if he's to reverse the precipitous decline in Israel's diplomatic position. Read more at Time