Ireland Readies for Obama's Visit May 23 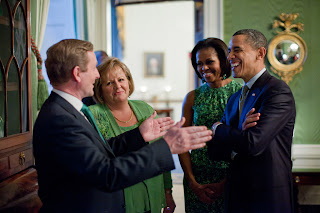 Obama, accompanied by Michelle Obama, will be in Europe next week, first to Ireland, then to England for a State visit, then to the G-8 in France.
The Irish Times has an Obama section, with information about the security ahead of Obama's arrival, preparations for the concert before his speech at College Green (sometime before 5:30 pm Ireland time) on Monday and his Irish roots:


WERE IT not for the rector of Cloughjordan, in Co Tipperary, Barack Obama would not be coming to Ireland at all – and might still be labouring under the misapprehension that he was not really an O’Bama. We know better now: “Barack’s as Irish as JFK,” as the Corrigan Brothers put it in their song. A discovery by Stephen Neill, the parish’s Church of Ireland canon, provided a key piece of the jigsaw of the US president’s Irish ancestry. Neill, whose parish includes Moneygall, the Co Offaly village that the president will visit on Monday, remembers well an e-mail from Kyle Betit, in Salt Lake City, in April 2007. Betit specialised in Irish genealogy and was working for Ancestry.com. He had reason to believe . . .

So had Neill. Though an optimist by profession, he could not get his head around the idea that the likely Democratic Party candidate for the US presidency might have local connections. The relevant records had been kept by Elizabeth Shortt, the parish treasurer in Templeharry, near Moneygall. Shortt had died only the previous month. What was about to happen “would have made her life”, says Neill.

After her death, Shortt’s son Harry looked after the documents. And it was in these, in all their faded glory, that Neill discovered proof that Obama was “as Irish as bacon and cabbage and stew”. But Ancestry.com imposed a strict silence. “It was hugely exciting, but what made it so difficult was that we were not allowed speak about it for weeks,” says Neill. Irish Times

Gifts to be given:


Among the gifts commissioned by Offaly County Council for the Obamas is an ancient monastic-styled calligraphy scroll and a silver and diamond pendant of an Offaly flower for Michelle Obama.

Renowned calligrapher and historian Tim O'Neill was commissioned by Offaly County Council to design and produce the traditional Celtic scroll, marking the "occasion of the historic visit" of the Obamas to Ireland.
Independent.IE