Republicans Don't Get the Concept of Income Inequality

Republicans need to be schooled in the meaning of income inequality because they're just not getting it. See Santorum's remarks and Mitt's.
Income equality or economic justice doesn't mean that we all want to get paid the same or that we want to take money from the rich and give to the poor, or as Mitt says, we begrudge those who are monetarily successful.
Income equality means getting a fair wage and fair benefits, being taxed fairly, government oversight and regulations so that taxpayers don't have to bail out businesses, and perhaps most important, access to affordable education so that people have a shot at a decent life. Right now, the people at the top pay themselves more than they pay their workers. That money doesn't trickle down either. It's circulated in the networks of the wealthy.
Mitt's economist insists that the marginal tax rate shouldn't go up. Here's a nifty chart that shows how the shrinking marginal tax rate has concentrated wealth in the hands of the few.
Here's what else: 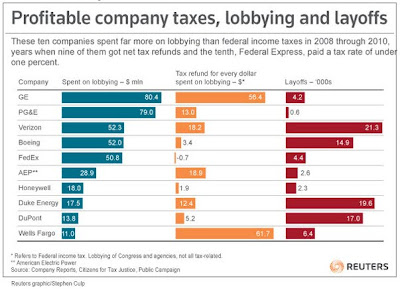