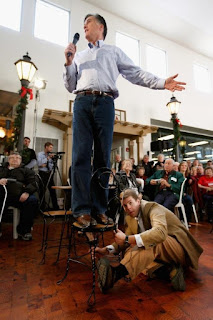 This guy appears to be holding Mitt's chair in place. Talk about bad visuals.

Mitt's son Matt is calling on Obama to release his birth certificate and to prove he wasn't an affirmative action candidate. When people talk like that, they may not realize that they're being racist, but they are. Matt also is the fool to say Mitt has nothing to hide, when Mitt explicitly said he'd never reveal his tax returns. He also wiped out his governorship when he finished up in Massachusetts. Mitt represents all the bad stuff about business and none of the good. His soul wears a business suit. Romney reminds me of the Grinch, a cold heart, three sizes too small. I pose this question: Do we know if Mitt's actually a human being? ..........


There’s off message and then there’s Mitt Romney’s son, Matt Romney, who suggested on Thursday that President Obama should release his birth certificate and grades before his father releases his tax returns. “He’s certainly not afraid of anything, he’s not hiding anything,” he said of his father in a video recorded by a Patch reporter in New Hampshire. “But I heard someone suggest the other day that as soon as President Obama releases his grades and birth certificate and sort of a long list of things, that maybe he’d do that.” TPM