Republican Has Apologized for Talking About First Lady's Butt 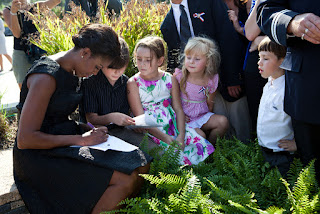 I didn't quite know how to write the headline on this post. I mean, republicans are turning into a gas. Jim Sensenbrenner said Michelle Obama had a 'big butt' in an effort to make a point about his disdain for Michelle's obesity campaign.
For one, Michelle Obama is gorgeous and she's very much in shape, but that is beside the point. There are limits to how much disrespect you show the President and the First Lady and Sensenbrenner dove over the line and should be publicly humiliated for it, so I hope I do my part in helping to do that:


The veteran congressman made reference to Michelle Obama's "big butt" while talking to a group of church members at a Christmas bazaar at St. Aidan's Episcopalian Church in Hartford earlier this month. He was suggesting it was hypocritical for her to launch a national campaign to combat obesity. Ann Marsh-Meigs, a church member who heard Sensenbrenner's remarks, said he took several swipes at the first lady on Dec. 10. In one, Marsh-Meigs said, the congressman claimed Michelle Obama left a recent charitable event when the media did, though Sensenbrenner's handicapped wife continued to work. "He then talked about how different first ladies have had different projects - Laura Bush and literacy - and he named two or three others," Marsh-Meigs said in an interview last week. "And then he said, 'And Michelle Obama, her project is obesity. And look at her big butt.' Journal Sentinel