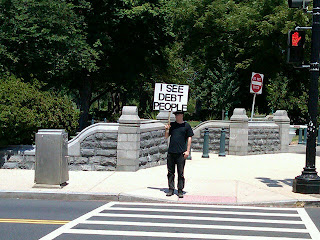 Liberals are all of sudden whining as if this hasn't been going on for weeks. Hello. For weeks it's been reported that Boehner's plan and Reid's were pretty similar and both have spending cuts. For weeks it's been reported that revenues would only be part of a larger deal, the one Obama wanted, not a smaller deal. Now people are realizing that raising the debt ceiling also means cuts? Hello again. Democrats lost the minute they let republicans tie raising the debt ceiling to spending cuts. Most Americans wrongly believed -- thanks to the excellent salesmanship by the republicans -- that raising the debt ceiling meant raising the debt. It's too late now. If you're a republican and the choice is default -- which you know POTUS will avoid -- versus getting everything you want, you're going eat the whole pie.


House leaders in both parties have their work cut out if they hope to pass a debt-ceiling package being finalized by the White House and Senate Republicans.

Although the details of the agreement are still emerging, early reports indicate it includes contentious provisions sure to alienate both conservative Republicans and liberal Democrats.

If both the left and right flanks of the lower chamber unite in opposition, it would fall to House Speaker John Boehner (R-Ohio) and Minority Leader Nancy Pelosi (D-Calif.) to forge a more centrist, bipartisan coalition to get the bill across the finish line – just as they did to cobble together support for the unpopular Wall Street bailout in 2008.
It won't be easy. Read the rest at The Hill