The laughable, ego maniacal Trump claims credit for Obama releasing his original birth certificate, but this will NOT stop the birthers. They will still believe because their hatred of Obama is based on bigotry, whether they acknowledge that or not. It's a sad shame that POTUS had to even mention his birth certificate -- ever -- because it says America is full of dummies, clowns and fools. Obama said he released his certificate because it's become a distraction. It seems he released it for the media as much as anyone else. Our media is most interested in controversy and has acted irresponsibly on behalf of the public. Our media has promoted birthers to such an extent that Obama had to make a statement on his birth. Pitiful nation. Low moment.

Here is Obama's original birth certificate for the ignorant who don't believe in facts even in the face of facts, so essentially, this is pointless. Mind you, contrary to what birthers have promoted in the media, this birth certificate doesn't prove anything more than the birth certificate Obama released in 2008. Though it may stop the media from reporting on this issue and spreading more ignorance. Just in time to save birthers from disgrace, original birther Jerome Corsi has a new book out on May 17 called "Where's the Birth Certificate? 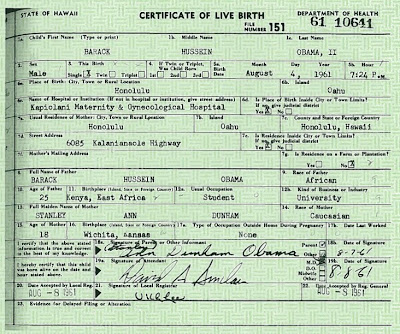 Birtherism is racism. Is it conscious racism? For some yes, others no:


Visit msnbc.com for breaking news, world news, and news about the economy
Posted by Olga at 8:13 AM