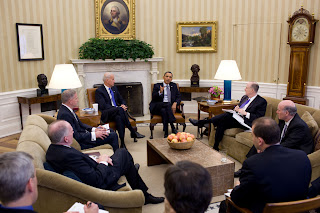 Obama and his staff discussing Egypt


From the White House:

The President has made a number of calls to foreign leaders to discuss the ongoing situation in Egypt. On Saturday, January 29th, the President spoke to Prime Minister Erdogan of Turkey, Prime Minister Netanyahu of Israel, and King Abdullah of Saudi Arabia. Today, he spoke to Prime Minister Cameron of the United Kingdom. During his calls, the President reiterated his focus on opposing violence and calling for restraint; supporting universal rights, including the right to peaceful assembly, association, and speech; and supporting an orderly transition to a government that is responsive to the aspirations of the Egyptian people. The President asked each of the leaders that he spoke to for their assessment of the situation, and agreed to stay in close contact going forward.

Hillary Clinton speaks about Egypt on This Week: "People are not going to stand by any longer and not be given the opportunity to fulfill their own god-given potential."  Watch
Posted by Olga at 3:21 PM