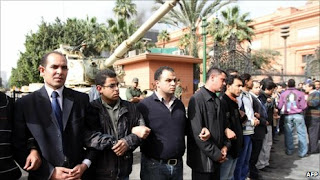 YOUNG Egyptians formed a human chain to protect a museum of priceless antiquities as Neighborhood Watch committees were organised to fend off looters.

Dozens of people on Saturday surrounded the Egyptian Museum in Cairo - which is home to the death mask of King Tutankhamun - where army tanks had been stationed, as anti-government protests swept the country for the fifth day running.

Egypt's opposition party, the Muslim Brotherhood, which has thrown its weight behind the protests, said it had recruited members to form Neighborhood Watch committees around Cairo to protect public and private establishments. "We have selected members to form [the] committees, and they will be stationed around the capital trying to protect property," Salah Abdelraouf said. Herald Sun


Visit msnbc.com for breaking news, world news, and news about the economy