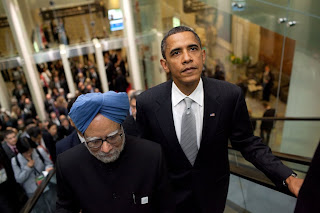 After much speculation and jostling with dates, US President Barack Obama is slated to make his first official visit to India in November second week.

It is learnt that both sides have agreed to hold the visit on November 7-10 after the conclusion of Congressional elections in the US.

Now that a set of dates is on the table, sources said, preparations have already begun with November 8 being planned as the day for official meetings. Indian Express

Obama will stay at the Taj Mahal hotel, apparently, the site of a 2008 terror attack. He'll meet with other world leaders while there:

Obama plans meetings with foreign leaders, including Chinese President Hu Jintao. That get-together comes at a time of rising economic and trade friction with China. Obama's itinerary doesn't include a stop in China, which Obama visited last year.

"It's a not a coincidence, necessarily, that we're going to four Asian democracies on this trip," said Obama's deputy national security adviser, Ben Rhodes. "We want to underscore the success of democracy in Asia and around the world." More at AP

In yet another new video series from the White House, Robert Gibbs answers the "first question" on Obama's trip to India: