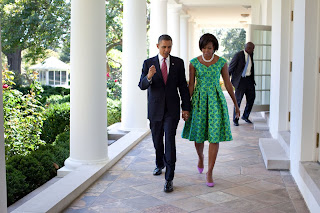 35,000 people showed up at the rally. A hoarse Obama reminded everyone that his election in 2008 was about creating an enduring movement of change.
He elaborated on his car in the ditch story, which is the perfect analogy for the republicans response to the economy and the Obama administration, saying that republicans were sipping on Slurpees and lattes as the democrats worked to get the car out of the ditch. Obama said, knowing that people were scared, republicans made a tactical decision early on to sit on the sidelines and exploit people's fears. When you think about it, republicans have shirked their duty of working to solve this nation's troubles. If republicans were in power, one thing is for sure, people wouldn't have had their unemployment benefits extended, since republicans stood against extending benefits three times.
Former astronaut and Sen. John Glenn was also at the rally. He praised Obama, even though he protested Obama's cancellation of the space shuttle program.
Mostly, you gotta vote.
Rally starts at 6:30 pm eastern. Michelle Obama speaks at 8 pm and Obama speaks at 8:05 pm eastern.
Live stream here.
Posted by Olga at 2:42 PM