Readout of Obama's Meeting With Gates and Petraeus 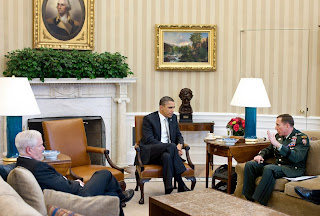 From the White House:


The President, Secretary of Defense Robert Gates, and General David Petraeus met today to discuss our ongoing efforts in Afghanistan, including the effectiveness of the military surge, the growth of the Afghan National Security Forces, and President Karzai’s expected March 21 announcement on beginning transition to Afghan security lead. They also discussed the plan to begin the reduction of U.S. forces this July, and the path to completing the transition to full Afghan responsibility for security by the end of 2014.